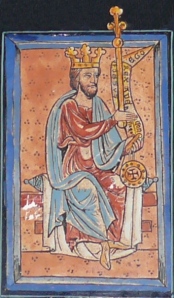 Hello, again. I wanted to take a minute to explain my new series in a bit more detail. It’s called 1014, and will take a look at the world of the year 1014. It was born out of the impending over-coverage of World War I, in this year, the centenary of the conflict’s buildup and commencement. I realized I’d never been through an anniversary of anything major. While the hailing and lauding of the Great War is well-deserved, what the hell happened in 1014?

In the series I plan to look at the key events, star players and major empires that shaped the world of 1014. It was an age of Viking conquest and exploration. Wars raged from the Balkans to the British Isles. Empires were rising and falling across the globe. I’ll be posting on the 1000th anniversary of any of the key dates, though exact dates are often hard to come by. Otherwise I’ll be posting two or three times a month on various topics from the period.

There’s a lot to cover and I don’t plan to do it alone. The idea for this series is that it will be a collaboration. I’ve got a few guest contributors with knowledge on some of the key events lined up. I’ll also be looking to re-blog as much as possible. If you’ve got any info or content you’d like to share or would like to write a post, I’d love to hear from you. Whether it be a biography on Alfonso V of León, a study on farming techniques in medieval India or a post on siege warfare of the 11th century, I’m interested. 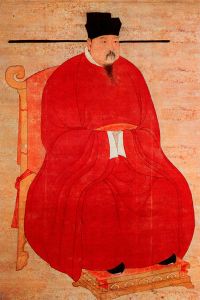 Emperor Zhenzong from the Song Dynasty. Artist and date unknown. From Wikimedia Commons.

We’ll look at Basil II the Bulgar-Slayer, ruler of the Byzantine Empire. We’ll look at Danish-ruled England and the battle for control there. Brian Boru, the greatest High King of Ireland battled Vikings for the fate of that island. The Christian kingdoms of Iberia were in the middle of their long, hard-fought Reconquista.

In the Americas, civilizations like the Maya, Toltec and Huari were beginning their slow declines while new ones stood poised to emerge. The Song Dynasty ruled in China, the Khmer Empire held much of Southeast Asia and the Chola Dynasty controlled Southern India. The Abbasid held sway over the Middle East, Persia and most of North Africa from their center of power in Baghdad. The Pecheneg, a Turkic people, ruled from the Caspian Sea to the Hungarian Border and the Rus were beginning to establish themselves in modern-day Russia. And Leif Ericson did or did not just “discover” the Americas, founding a settlement called Vinland. 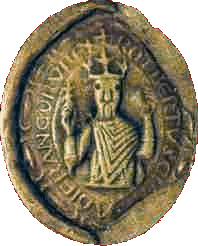 Seal of Robert II of France.

I also want to look at daily life during the times, not just for the movers and shakers of the world, but for the common man and woman. Life was difficult then. A bad harvest could spell famine and disease and bad harvests were easy to come by. Warfare fought on the the whims of the powerful could spell death. Raid after raid was also a constant threat for all but a few. Children were lucky to live to adulthood and the women who bore them were lucky to survive.