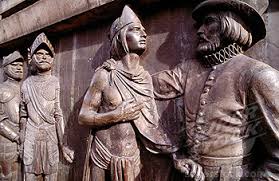 This is a reblog from Now We Know Em, a blog I’ve just discovered. Cuauhtémoc is regarded as the last ruler of the Aztec, though this depends on who you ask. His reign was short and followed Montezuma II’s. You’ll learn more if you read on!

I’ve been looking for some good material to reblog regarding the Age of Exploration / Discovery. If you know of any, send it my way, either in an e-mail or to my Facebook page.

Statue of Cuauhtémoc in Mexico City.

Cuauhtémoc was the Aztec ruler of Tenochtitlan from 1520 to 1521.

The name Cuāuhtemōc means “One That Has Descended Like an Eagle”, commonly rendered in English as “Descending Eagle” as in the moment when an eagle folds its wings and plummets down to strike its prey, so this is a name that implies aggressiveness and determination.

Cuauhtémoc took power in 1520 as successor of Cuitláhuac and was a cousin of the former emperor Moctezuma II.

His young wife, who would later be known as Isabel Moctezuma, was one of Moctezuma’s daughters.

He ascended to the throne when he was 25 years of age, as his city was being besieged by the Spanish and devastated by an epidemic of smallpox brought to the New World by Spanish invaders.

Once upon the throne, Cuauhtémoc unsuccessfully called for reinforcements from the countryside to aid the defense of…