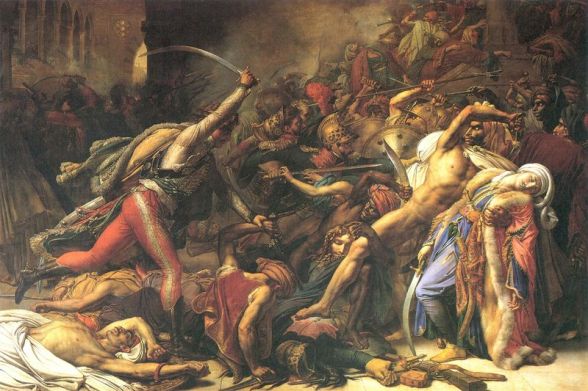 The revolt of Cairo took place in 1798, shortly after Napoleon Bonaparte and his French forces took the city during their occupation of Egypt. The campaign was fought to destabilize British power in the Near East and India and, ostensibly, to spread the ideals of Republicanism. After taking Cairo without a shot fired in July of that year, tension began to mount. On October 21, in a surprise attack, citizens of Cairo rose up in revolt against the French stationed there, killing French general Dominique Martin Dupuy, among hundreds of others, in the process. Napoleon returned to the city and his response was both swift and brutal. After herding the belligerents into the Great Mosque, which had been fortified and armed by the locals for the days events, he opened fire with his cannon. French forces then massacred the Egyptians who’d taken refuge there, killing or wounding some 5,000. 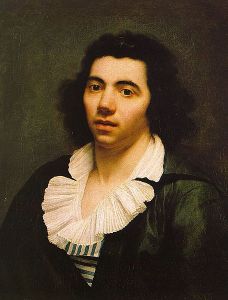 Painted in 1810, The Revolt of Cairo, is one of my favorite war paintings. While the subject matter may not be the most critical, historically speaking, Ann-Louis Girodet’s piece shows French soldiers charging into a crowd of Egyptians. One defender is notably nude, holding a wounded comrade in one arm while fighting off the attack with a knife in the other. His foot is perched on a fallen French soldier.

The artist, Girodet, was born in Montargis, south of Paris, in 1767. He was a one of the firsts in the Romantic movement. He painted in Italy and did commissions for monarchs throughout Europe. Upon his death in 1824, some of his vast collection of drawings and pieces were sold for considerable amounts, betraying the cliche of the artist who only realizes fame posthumously.

The painting hangs in the Palace of Versailles.

To view other entries into the War Paint Series, follow the link.