China’s history is littered with the names of famous dynasties. Imperial China began in 221 BC and lasted until 1911 AD with the fall of the Qing. Dynastic names like Ming and Han are well-known throughout the world, but the first imperial dynasty, the first to unite all of China, as well as one of the shortest-lived, was the one founded by the man known to history as Qin Shi Huang, the Qin Dynasty.

Born Zhao Zheng, he inherited the throne of the kingdom of Qin at the age of 13. Court life was full of twists and turns and intrigue. He was the son of the King Zhuangxiang and a concubine. It would be rumored that Zheng was illegitemite, and attempts to install a rightful error would come.

Upon ascending to the throne, a half-brother, Chengjiao, rebelled against the crown. Surrender and execution soon followed. Further attempted coups and assassinations would follow. Zheng would survive them all, with predictable outcomes for the perpetrators.

This era of Chinese history is known as the Warring States period, a struggle between seven kingdoms for control of China. It begins around 475 BC (dates vary) and ends with Zheng, and the Kingdom of Qin, conquering the other six kingdoms, from 230 to 221 BC, under the guidance of general Wang Jian.

Sizes for the armies range up to 1 million participants in some of the larger battles. Though impossible to verify, armies of this size would not be seen in Europe until World War I. The Battle of Waterloo saw around 200,000 participants, for some frame of reference.

With China now united, Zheng, now known by the name of Qin Shi Huang, which literally means first emperor of Qin, set about consolidating his rule. A series of drastic reforms were set in motion.

China was divided into 36 commanderies, further broken down into districts, counties and 100-family units, known as Li. People were no longer allowed to refer to the independent kingdoms or refer to their native region. Appointments in the administration were now won through merit.

During this time, units of measure, currency and the Chinese script were standardized. Public works projects such as the Great Wall of China and the Lingqu Canal were undertaken. The canal was the first in the world to connect two river valleys, the Pearl River and the Yangtze.

One of Qin Shi Huang’s less popular reforms was in the realm of thought and discourse. The Warring States Period, while bloody and difficult, had seen ideas flourish and the Hundred Schools of Thought, among them Confucianism, Taoism and Legalism, take hold. It is known as the Golden Age of Chinese Philosophy.

The Qin endorsed Legalism as the state ideology and set about to purge the empire of dissent. All other schools of thought and philosophy were banned and one of the more tragic episodes of book burning took place under the emperor’s reign. Severe punishment was meted out to anyone found to be in possession of any unlawful texts. Copies of banned works were kept in the imperial libraries, but were later destroyed when the capital was sacked following the collapse of the Qin Dynasty some years later. What masterpieces were lost for eternity will never be known.

A 19th century ukiyo-e depicting the ships of the great sea expedition sent around 219 BC by the first Chinese Emperor, Qin Shi Huang, to find the legendary home of the immortals, the Mount Penglai, and retrieve the elixir of immortality. By Utagawa Kuniyoshi, c. 1839-1841.

The multiple assassination attempts on the emperor’s life took it’s toll on his mental health. He became fixated on immortality and paranoia set in. A constant quest to find the elixir of life and a mystical, 1000-year old wizard named Anqi Sheng, became his all-consuming obsession. Expeditions were sent to locate and procure the services of the magician, to no avail.

The emperor’s quest was futile, and he died in 210 BC while touring his eastern provinces. The cause of death was reportedly mercury poisoning. Ironically, he was taking mercury pills prepared by his court alchemists as a measure of achieving the immortality he so desperately sought.

The emperor’s death was kept hidden, as the officials were two months away from the capital. Upon their return, two key ministers, Zhao Gao and Li Si, doctored the imperial will to ensure that the most malleable of his sons ascended to the throne. Incompetence was the hallmark of Qin Er Shi’s short reign. He would arrest people who brought him bad news, execute people at will and spend lavishly. Unrest and revolt soon took over the land, and in 206 BC, the Qin Dynasty collapsed, paving the way for the rule of the Han. Harsh measures enacted by both father and son are believed to be the cause of the revolt. 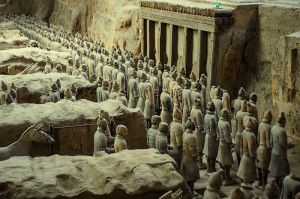 Terracotta Warriors, in formation, from behind. By J. Arpon.

Qin Shi Huang’s mausoleum has been known for millennia, and reports from the time have 720,000 men being forced to build it (a likely exaggeration). Most of the workers were put to death upon its completion, to ensure secrecy. Sima Qian, writing from the second millennium BC, reported that rivers of mercury flowed through it, replica palaces abounded and rigged crossbows stood ready to fire upon anyone who entered.

The First Emperor also left one of the great treasures of Ancient China, the Terracotta Army. The treasures were not discovered until 1974, when peasants were digging a well, some 1.6 km from the tomb. To everyone’s surprise, some 8,000 soldiers, an entire army of the dead, is being unearthed. Traveling exhibits of the warriors rank among the most popular in the world.

Despite the short duration of the Qin Dynasty, its impact is far-reaching. The unification of China, the Great Wall of China and the first centralized, bureaucratic empire known to mankind were just some of its achievements . The model set by Qin Shi Huang would be followed by successive dynasties. Perhaps, most notably, Qin (pronounced Chin) is believed to be the root of China, the European word for ‘the Middle Kingdom’ (as the Chinese refer to their land).