Tabula Rogeriana – upside-down with north oriented up, by Muhammad al-Idrisi, 1154

The history of the relationship between Muslims and Christians in Europe and the Middle East during the Middle Ages is well documented. From the Crusades for Jerusalem to the shining cities of Al-Andalus, the two religions frequently inhabited the same spaces, sometimes clashing while other times intermingling at ease. One oft-forgotten region where a near-flawless co-existence occurred is Sicily during the rule of the Hauteville counts and kings, most notably under Roger II.

The story of the rise to prominence of the Hauteville family is a great tale of adventure. A small noble family in control of a Barony in Normandy, the family would participate in the Norman conquest of England, take over much of Southern Italy, found the Kingdom of Sicily and participate in crusades in the holy land.

The first member to see their name etched in the history books is Tancred. Little is known about him, but the deeds of his children and further descendents are what survives today. He had 12 sons and numerous daughters, many of whom traveled to Italy as mercenaries in the service of various rival factions. Battle-tested, these adventurers would win land, fortune and fame and write home about it, thus attracting more Norman adventurers. This culminated with Tancred’s youngest son, Roger I, capturing Sicily from 1061 to 1091. His son, Roger II, became the Count of Sicily in 1105, at the tender age of nine, following the death of his older brother Simon.

Before the Norman conquest, Sicily was ruled by the Emirate of Sicily, which had been in existence for over 200 years. Much of the population was Greek Orthodox. Muslim rule was widely regarded as more tolerant than it’s Christian contemporaries and there was thus, a relatively large Jewish population living on the island.

Under the Emirate, Sicily experienced economic growth as land reforms, irrigation, new crops and an international maritime economy ushered in previously unheard of wealth to the island. This cosmopolitan environment lingered on into the reign of the Normans and is the environment that Roger II grew up in, with Arab and Greek tutors.

Roger’s reign is considered one of the most able in medieval times. In an era of hereditary monarchy, a nation’s fortunes could rise and fall with the randomness of the firstborn son. Sicily got lucky here. His reign is known for its religious tolerance (especially for Christian Europe) and its pursuit of knowledge. He was fond of Arabic language and culture, considered too cozy by many on mainland Europe, and was even referred to as ‘the Baptized Sultan of Sicily’.

Roger II of Sicily. From: the “Liber ad honorem Augusti” of Petrus of Ebulo, 1196

First as the Count, later as the Duke of Apulia & Calabria and finally as the King of Sicily (a territory unifying all of the Norman conquests in Italy, Malta and Northern Africa) Roger surrounded himself with intellectuals. No pursuit was left untouched. Philosophy, mathematics, poetry, medicine and science were all explored and expanded upon under Roger’s reign. The King himself would often take active interest in the pursuits. Learned men were brought in from all over the known world. One such man was Muhammad al-Idrisi.

Al-Idrisi was born in Ceuta, Morocco, across the Straight of Gibraltar from al-Andalus in 1099. He traveled the Mediterranean and had many interests, poetry among them, but was best known as a geographer. Much of the detail of his early life is scarce. His greatest legacy is not his biography, but his masterpiece, made for his patron, King Roger II, the Tabula Rogeriana.

The Tabula Rogeriana, also known in English as the Book of Roger, is the finest work of geography of it’s age. It was comprised of a silver disc some 80 inches across and weighing over 300 pounds (203 cm and 137 kg) with al-Idrisi’s map engraved upon it and an accompanying book. Al-Idrisi understood the world to be round, and the disc represented this. 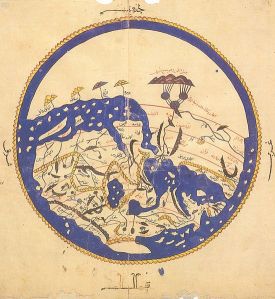 The book was a compilation of all known geographical information in the world. It was highly detailed and broken into regions. Each region had a description of its climate, a list of main cities with descriptions of those cities, distances between the cities, cultures, languages and religions of the inhabitants and more. It even calculated the circumference of the Earth within 4% and was the most accurate map in existence until the Age of Exploration, some 300 years later.

To compile the information, al-Idrisi and Roger went to painstaking measures. The geographer would interview merchants and seamen from as many boats docking in the kingdom as possible. Anyone who had been to a far away land would be interrogated for everything they new. Wherever reports about a piece of information were conflicting, it was disregarded. Staff was dispatched to far-flung regions to collect knowledge where it was lacking.

No expense was spared and the entire process took 15 years. Roger himself was said to have participated as much as his busy schedule permitted. The work was completed and presented by Muhammad al-Idrisi to his patron, Roger II, in 1154, only a few weeks before the king’s death. It was written in Arabic.

Roger, however, was the first, and only, great king of Sicily (his son and successor was dubbed William the Bad) and his progeny let the kingdom fall from their grip. During William’s reign, civil unrest gripped the capital in 1160 and the royal palace was stormed. Sadly, both the disc and the book were destroyed in the mayhem.

What survives today are copies from a second book that al-Idrisi made for Roger’s son William. A few copies are kept in libraries from Istanbul to Oxford with only 10 in existence. The original work only lasted six years before its wanton destruction. How close we were to losing one of histories greatest works.